Alaska has a great resource in the Cruise Line Agencies of Alaska website. It has port schedules for all Alaska ports, every day of the cruise season. This does not excite everyone, but for scheduling nerds, it’s nirvana.
I found the site because I was trying to determine if we were going to be tendering. (We weren’t.) However, the site shows every ship that will be in port by day, so you can find out who your neighbors will be.
Somewhere along the line, I started wondering how many passengers were being dumped on these rather small towns – so I got the double-occupancy numbers for all the ships from Wikipedia. I knew the ships would all be carrying above that number, but double occupancy is what is considered “full.” Since I was on Wikipedia anyway, I got the latest population counts for the ports.
There were a couple of towns where the populace could have boarded the ships, and had extra room.
[googleapps domain=”docs” dir=”spreadsheets/d/e/2PACX-1vRtzgoRUnnEzM2z0klnh5BabsTxuqHoUKRM43fLcwJG0dNHP376Vx3Y5wat5Xxe2WO0pTG-vq3gMeah/pubhtml” query=”gid=0&single=true&widget=true&headers=false” /]

I never thought it would happen, but after seventeen cruises, we have finally booked an excursion outside the ship’s excursion offerings. Sure, we’ve had a couple of ports where we just wandered around on our own, but we were never that far from the ship, and it was usually pretty well-planned (and limited) – like going to lunch or meeting people for drinks.
Now, booking through the ship is usually considered a badge of shame on Cruise Critic (which should really be called Cruise Whiners much of the time), because the ship excursions cost more, the selection isn’t as plentiful, and usually because the ones telling everyone not to book through the ship are selling their own excursions.
Me? I like booking through the ship, if there is something interesting available. It goes on the same statement, it’s paid over time with the rest of the cruise fare, and there is some hope the ship will wait if the excursion gets back late.
The last part was never much of a consideration, until Alaska, when excursions were ending just before the ship was going to leave, mainly because the time in port was so short.
So, I never really considered anything else – we either did a ship shore excursion, or we didn’t do anything organized at all. In Cozumel, we would just get a taxi to go to Pancho’s Backyard, which was conveniently in the same building as my wife’s favorite souvenir store, and I would have a margarita or two, and try to pay my bar tab while there was still money in the account.
So, it’s time to shake it up a bit. We’re sailing at Christmas. Again. We’re going to Cozumel. Again. Cozumel is one of the default destinations for all Western Caribbean cruises, and we’re sailing out of New Orleans, so that’s where we’re headed. We’ve done all the interesting excursions, some twice, some that weren’t that interesting, and we’ve just gone to eat and shop.
What’s left?
There are a couple of Cozumel suggestions that always come up – Mr Sancho’s (a beach resort) and the Cozumel Bar Hop. You can’t book either of these through the ship, so it was time to cross over to the self-service excursions.
I always wanted to try the Bar Hop, mainly because it has the word “Bar” in the title, but also because it visits the ocean side of the island (the east side, where no tourists generally go.) We almost decided on it, but then we looked at Mr Sancho’s, and they have an all-inclusive plan – all you can eat, all you can drink.
You can find YouTube videos of people hammered at both places, so that’s a push.
However, when you’re married to a diabetic, as I am, food options are important. There are snacks on the Bar Hop, but it wasn’t clear how much food there is available – or whether someone nameless would actually partake in what was offered. So, all-you-can-eat is a good bonus, especially when the someone nameless approved of the menu. (When you’re married to a diabetic who goes on and on about needing food options, all-you-can-drink is a necessity.)
(It turns out there are a lot of resorts selling day passes in Cozumel. Mr Sancho’s is just the one I heard about first — and most often. Apparently, there is a whole lot to do in Cozumel that is not available through the ship.)
Mr Sancho’s, it is.
So, I booked my first excursion without going through the cruise line. They took a $5 deposit on a $55 all-day fee, so we owe them money when we arrive. We need to have money for the taxi over there and the taxi back. The taxi ride back is the money many people forget about.
Also, we have to remember to get back to the ship on time. This is where all-you-can-drink could be a slight negative.
I will have to see if you tip the waiters enough, if they will pour you into a taxi to get back in time.
They do close at 5pm, so if you’re there at closing time, you’ve missed the ship.

When you’re in a distant town over Memorial Day weekend, the first thought (for me) is “Where is the local baseball team?” They were out of town. The next thought, if you cruise as much as we do and the town has a river, is “What cruises are available?”
“Cruise” in this case is a relative term, since it’s not the ocean, it’s the Illinois River, and it’s not a cruise ship, it’s a paddlewheeler. A paddlewheeler! (So, it’s a boat, not a ship.)
I took three cruises in two weekends – including one with a Kenny Rogers impersonator. (I never saw that on Norwegian or Carnival!) I was on the Spirit of Peoria so much, the Captain recognized me when I boarded the Music Cruise. (The good Yelp review helped.)
I love watching the wake off an aft balcony of a cruise ship, but watching the wake being created is a bit magical. (Shot with a fisheye lens for artistic effect.)

[wpvideo 4hLqcVyX]
The map is elsewhere on the site, but I figured I’d add it here. It’s not the longest cruise I’ve ever taken, but it may be longer than the one around Lake Ray Hubbard on the Harbor Lights outside Dallas. Maybe.
[googlemaps https://www.google.com/maps/d/u/2/embed?mid=1cY0fHg81_9wiebUEHpNddNWhmskyi_UE&amp;w=640&amp;h=480] 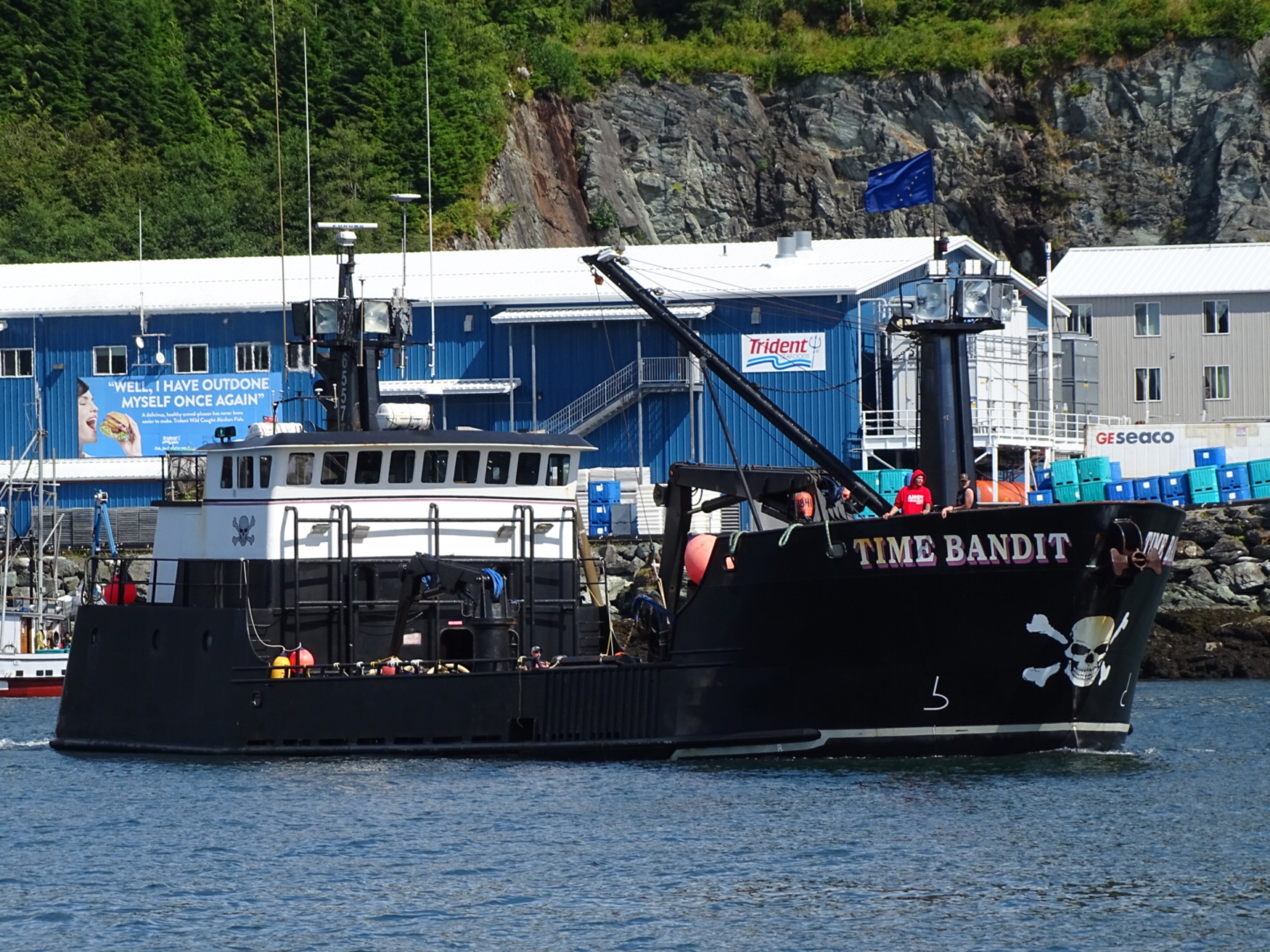 I’m pretty sure no matter what cruise ship they arrived on, there were some people that really wanted to be on this boat, instead. (Shot from onboard the Aleutian Ballad, another “as seen on Deadliest Catch” boat, and a great excursion.)

This was our home away from home for a week around Alaska (well, up and down the coast, anyway.) The Norwegian Bliss is one of the newest ships in the Norwegian fleet, with all the bells and whistles, and then some. However, if you’re sailing Alaska for the first time, you tend to not use any of them, because you’re focused on the scenery – especially if you have an aft balcony, as we did. So, other than keeping the teenagers and millennials busy, the extra features just run up the costs for me – they don’t add value. It’s one of the reasons I prefer the smaller ships.

Wow. That was fun.
So, we survived our first Alaskan cruise – our first with my wife’s family, first on a Breakaway Plus class ship, first cruise from Seattle, first visit to Canada… and so on.
Seattle to Ketchikan, Juneau, Skagway, Victoria (It’s cold! We must be in Canada!) and back to Seattle.
The good?

We need to do this again, now that we’ve done it once and learned some lessons. We need a smaller ship, longer port times, and more camera gear.